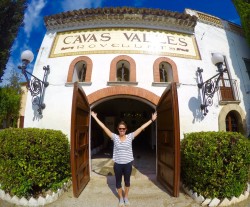 On a regular Saturday in August, we experienced one of the most scenic, educational and amazing wine tours. The tour began with an incredibly scenic bike ride followed by a winery tour with a huge difference. Rovellats Estate was far more than your regular wine tour with the whole estate stooped in history dating back to the 10th century. Between the bike ride through the Penedès wine region and Rovellats history, it was never going to disappoint! 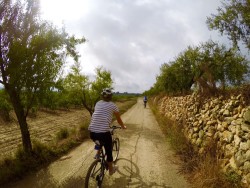 The journey started at Wine Pleasures, located in the High Penedès at 700 metres with a steady downhill pedal through pine forests and views as far as the eye could see. As we progressed, the country opened up into many small vineyards and orchards so close to the road you could nearly pick the fruit as you passed by. Our guide and Cava expert, Anthony pointed out many features in the landscape, including many old churches and a couple of preserved rock huts purely formed into an igloo shape with rocks, no concrete! As we approached the village of Sant Marti 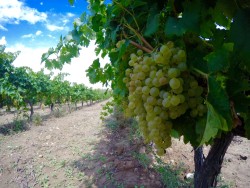 Sarroca we hit flatter country and the bigger vineyards really started. This lead to a couple of great stops tasting ripe grapes ready to pick – the best of these was easily the sweetness of the Chardonnay grapes. As we entered the village of Sant Marti Sarroca, Anthony explained the speckling of vineyard and orchard courtyards throughout the town. In the past, Sant Marti Sarroca, had been completely dominated by vineyards and orchards but due to increasing settlement, houses were built and vineyards replaced. So as the tractor started up in the middle of town, we proceeded toward Rovellats. This 5km bike ride was beautiful! Large vineyards and winter cereal stubble running from the flats to the hills for kilometres. As we enjoyed the tranquility of the ride, along came 50 Great Cava producer Rovellats. 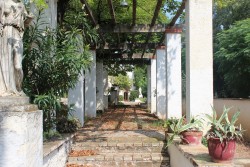 As we pedaled into the Rovellats Estate, we were met with a grandness and a feeling of historic significance. The numerous flourishing roses, flowers and trees, as well as the modernist sculptures, fountains and large pergola led to an instant rush of excitement, but this was just the beginning! It was no wonder that Rovellats has been included in the wine and Cava routes of Catalonia by the European Council of Wine Routes. 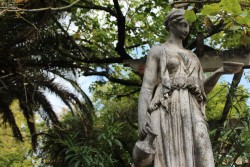 Our first stop after admiring the garden area and hearing of the many garden parties hosted here in the past, was the chapel. This is no ordinary chapel as it is converted from an old wine, round pressing chamber! The chapel now boasts elegance with modernist frescos decorating the walls and 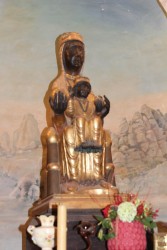 ceiling. Crowning the chapel is an identical replica of the original Black Virgin of the Monastery of Montserrat. The chapel is accompanied by an eye-catching buttress bell tower which really makes the conversion complete.

From the chapel we then hit the grand entrance, better known as the Masia. This typical Catalonian entrance welcomes visitors with a Roman arch dating back to the 10th century, built out of the original half point stone. You are then exposed to a 14th century gothic vault and original remains of an old wine press now used as a wall support for the kitchen. The kitchen itself demonstrates the way in which they lived with a modern rendition of the typical fireplace used for both cooking and warmth, as seen through the moulded seats in the walls surrounding the fire. 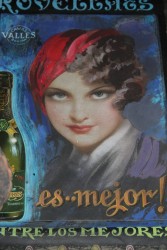 As we get closer to the current day operations of Rovellats, we pass through the old cellar and the museum, both of which boast direct evidence to the estates past. The old cellar is flanked both sides by old vats and oak barrels as this was the place where the first Rovellats Cava was produced. Following the chain of old maps and aerial views of the 210 hectare estate, as well as  photographs of famous personalities to have visited Rovellats, we stroll along the original wagon rails into the museum.

The museum is the type of place you could spend 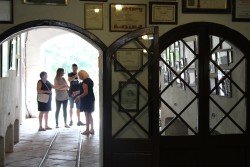 hours and still not have seen or read the details of the history of both the wine and Cava making at Rovellats but also the posters boasting of parties and festivals of sort through the Art Nouveau periods in the 1920’s to 60’s. The several antique tools and devices used over the years for Cava production, together with the collection of old bottles, glasses, labels, awards and advertising posters made for an enlightening walk into the past of Rovellats, and we were very happy to be heading back here for tastings at the end of the tour! 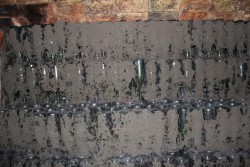 As we walked through the first ancient cave of Rovellats, surrounded by old capping and corking tools and many decorative musty bottles due to humidity, we get into the modern day Cava operations of Rovellats.

The large fermentation vats and more modern machinery to improve the 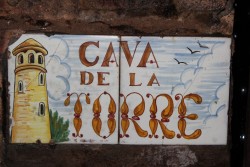 production of Rovellats, are testimony to the change over the 3 generations involved in the Cava making. Unfortunately, we were unable to see the process in action but the explanation of what we were looking at was visual enough. But onto possibly the most amazing part of the estate, the Rotonda. 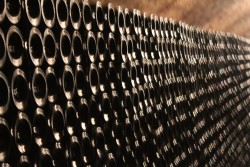 The Rotonda is the location where the Rovellats Cavas are patiently aged for between 2-6 years. The cave itself is a six-point star structure and a central circle that is 12m below ground. It is in fact, the worlds only radial cellar left of this design. It has a natural temperature of 13ºC, is very humid, and had bottles of ageing Cava for as long as the eye can see down every point of the star shaped design. Thousands and thousands of bottles! 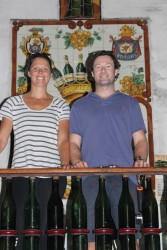 After passing through the modern conveyer belts for the cleaning, corking and labelling of the bottles, we passed through the grand warehouses previously used for hosting the many elaborate parties at the estate but now used for carton and bottle storage. The grandness is well and truly still evident however, with high ceilings and arches and elaborate staircases with railings decorated with old Cava bottles. After this it was time to head back to the museum for the tasting. 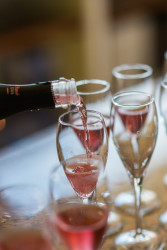 Rovellats offered three of their Cavas for tasting, and made sure we all received the full glass to enlighten our tastebuds. The first was the flagship Cava of the family business, Gran Rerserva Brut Nature from 2009. This was strong tasting Cava whilst be very flavoursome on the palette. You could get the sense of a fruity, almond aftertaste. Next in line was the Imperial Rose. This was my least favourite of the three but again was crisp and clean in taste whilst giving hints of a fruity background. The last of the three, and potentially due to it being lunchtime, my favourite, was the refreshing flavours of the Premier Brut Nature. The tasting of these three Cavas was fantastic as you mingled with other visitors whilst exploring the history of Rovellats further. 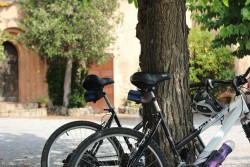 The tour of Rovellats was over, and what a tour it was. We happily jumped back on our bikes and continued back to Sant Marti Sarroca via unmissable landscapes yet again. The day finished in the village with a sandwich in Sant Marti Sarroca and a bit more Cava!

It is very easy to recommend the two businesses involved in the day as it is a day we will never forget. Wine Pleasures and Anthony took us on a full region information and sight seeing tour. The bikes were modern, well maintained and more than enough to allow for easy cycling. Rovellats Estate was incredible and the whole day couldn’t have been any better for us. 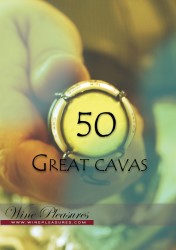 3 of the Rovellats Cavas (Masia S.XV Brut Nature, Rovellats Col.lecció and Rovellats Gran Reservva Brut Nature) are amongst the 50 Great Cavas and 50 Great Sparkling Wines of the World annual publications.