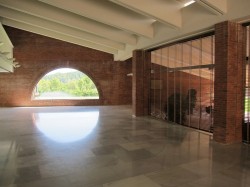 After visiting Raventos i Blanc in the heart of Sant Sadurni D’Anoia, the thing that continually comes to mind is absolute opulence and attention to detail. When you arrive at the entrance to their property, you drive through row after row of their beautifully manicured vines until you reach their property across the street from Codorniu. We learned that Josep Maria Raventos i Blanc created this facility to have more freedom to make the wines that he wanted to make without having to get the approval of a separate committee. 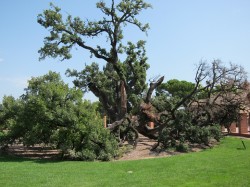 We met with the current Vice President of Raventos i Blanc, Joan Amat i Sole, who explained that Josep brought in architects Jaume Bach and Gabriel Mora to produce something that was integrated into the landscape and also put a focal point on the old oak tree that grows up next to the property, which is also a symbol of the family. Being inside reminded me of the architectural design of Frank Lloyd Wright with the clearly defined lines and large windows that provide great views and open the space with an abundance of incoming light. 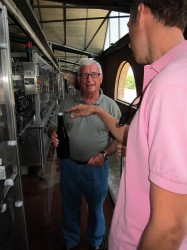 He then led us around the facility starting with the gravity flow machine and then down into their bottling room where we were elated to watch the process of bottling their Brut Nature Reserve, starting with disgorgement and finishing with labeling. It is clear that they run a tight facility and everyone does their part flawlessly. Not only that, but I have to mention how pristine their whole operation is. Not a cob web in sight, they pride themselves on preventing any outside influences from affecting the wine. Even the windows were being cleaned when we were there! 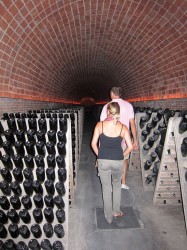 One of the personal highlights for me was when we were in their massive cellar and came to one corridor with their high-end wines that they riddle (turn the bottle to displace sediment) by hand. Joan turned off all of the lights except for the accent lights that ran down the corridor and it glowed just enough to give the effect that we were walking in a graveyard of Cava bottles…pretty unique experience.

If things couldn’t get any better, we were led back to the main lobby where he poured us a glass of their 2008 ‘de Nit’ Cava Rose…in my opinion, seduction in a glass. After a few sips, we were led to their personal library where he showed us 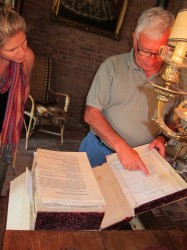 the personal diaries of his family and their accounts of working with wine written in the 19th and early 20th century. It was a rare look at the many generations of wine knowledge that has led them to where they are now, definitely evident in the rose we had moments before.

This was a great personal touch to a great visit to Raventos i Blanc. From the way they present themselves to the way they handle and produce wine, I couldn’t 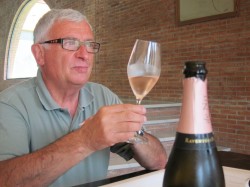 recommend this bodega more for those who are looking for serious Cava.