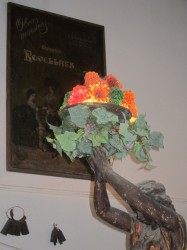 After a 15k bike ride from the Wine Pleasures Estate in the high Penedes Mountains, the first thing I needed to do when we arrived at Rovellats winery was to use ‘el bano’.  Turns out, this wasn’t just a ‘down the hall, to the right’ sort of bathroom tour; I was led into a 10th century farmhouse, down through their 15th century caves, and finally into their modern cellar where the bathrooms were located. Sufficiently intrigued, on a trip to the bathroom no less, I couldn’t wait to learn more! 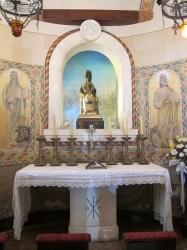 When I was done, we headed back upstairs, grabbed the rest of the group and proceeded through an official tour of what I had just seen, and a lot places I hadn’t.  One of the most unique parts of the winery was the on-premise chapel. It was complete with stained glass windows, candles, and a replica of the famous black virgin in the Monserrat Mountains. It is often used today for personal services and masses, but we learned that before its role as a chapel, this small round room was where the grapes were brought in and stomped into wine.

From the chapel, we were shown through a restored 10th century kitchen and into their tasting salon/winery museum. Even though I had walked through it before, I missed the winery’s sexy advertisments from the turn of the 19th century that hung high on the walls, the black and white photo books of family and guests, and their antique bottle and glass collection. For the four of us Millenials, it was surreal to see this ‘really old’ wine memorabilia. 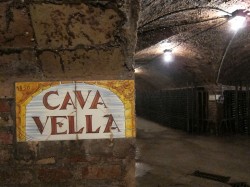 We continued our voyage back in time past long-retired bottling and corking machines, to the cool, wet cave where thousands of bottles were aging peacefully in the arms of their ‘six-pointed star.’  This was unlike any other cave I had seen, and while it was as old as the rest of the building, star shaped corridors and brand new vintages of Cava were kept with modern precision.

Whenever I visit a winery, I try to figure out what it is that sets them apart from everywhere else, what makes them different; as we went from one ancient corner of the winery to another, the answer became clear: Rovellats truly embraces the history of the land, the people and the traditions more than anywhere else I’ve visited. From their 10th century farmhouse, to their Cava museum, to their insistence on hand picking everything and using only their own grapes to make their wines, this place is making great-tasting Cava in the same way as their forefathers. 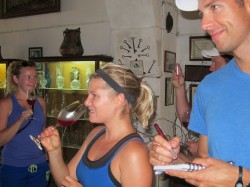 It wasn’t until we walked into the production portion of the cellar that their modernity shined through the centuries. Bottling lines, fork-lifts, and palates wrapped in plastic for shipment showed that despite their respect for tradition, they also embrace certain innovations and changes to wine quality control and production.

Our brains bursting with the history of Cava and the Penedés, we looped back to the tasting salon to try some wines. Visiting Rovellats was certainly an unforgtable experience and something I would recommend to anyone visiting Cava country. See our tasting notes in the e-book 50 Great Cavas