The family owned winery on the outskirts of Ódena (Igualada) has been thriving since the 13th Century, now known as Mas Macia its name has changed several times over the years while being passed from generation to generation of nephews and sons. However the value and appreciation of its heritage has not withered in the slightest which is evident by the continual use of the old cellars and the preservation of the original country house. 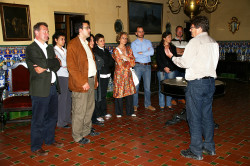 The evening started with a visit to the XIII century farmhouse, Can Macia with special mention of the 1922 chapel (housing some interesting frescoes by the renowned artist Josep Pey i Farriol) built in a neo-Gothic style and dedicated to the Mare de Déu de la Mercè.

The property spans over 200 hectares with the use of 35 hectares of vineyard, the family enjoys the advantages of having these vines grown close by means a quick delivery to the cellars. 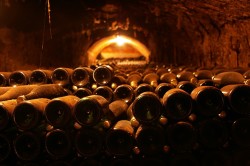 t was in the early 1930´s the history of cava first began at this winery, originally it was produced and sold only in the local region but its success grew from there and as it has since been passed through the family and subject to the innovation of the winemakers along the way. It is now the key to their success, producing over 600,000 bottles a year with 90% of these being exported.

The underground cellar built-in 1547 still to this day functions as the place for these Cavas to undergo the fermentation period required to produce the high quality Reservas and Gran Reservas. The impressive hand-built cellar with its interconnecting tunnels holding 60,000 bottles each is incredible to walk through, appreciating the work that must have been put into such a system un-phased by the years apart from some spider webs hanging from the corners and the damp puddles in the path.

A treat for visiting tourists is the interactive activity set up where they can not only see how a Cava was produced by the ancestors of this family but they can create their own, cork, label and all to take home a souvenir. Another truly unique experience is the insight into typical Catalan life from another time, the house in its very design tells a story of the lifestyle lived. The centre of the house a large open space where animals would be herded through, the first floor has the bedrooms to the side where it could be kept the warmest and the third floor used for grinding cereals. Beyond this the house is filled with pieces of intrigue from the dowry cases of the girls in the family to the enormous dinner set with each piece individually hand crafted. 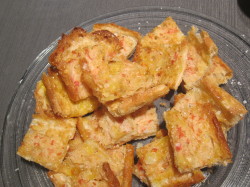 After a presentation and tasting of 3 of the Bohigas wines  – Bohigas Blanc de Blancs (100% Xarel.lo) Cava  Brut Nature Reserva Noa de Bohigas (50% Xarel.lo & 50% Pinot Noir – 91 points in the 50 Great Cava eBook 2013 – available 1 August 2013) and Bohigas Cabernet Sauvignon – hunger signals started getting to the brain and our table numbers were soon announced – we got lucky table number 13! We were served some of the most representative products of traditional Catalan cuisine by the prestigious Cal Ble restaurant 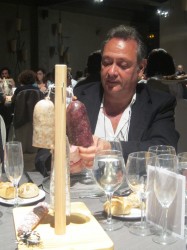 such as Coca de vidre amb tomáquet i ganxo d”embotits variats (Bread drizzled in olive oil with a rubbing of tomato and cut yourself a slice of one of the many kinds of cured meats set in the middle of the table), Xatonada, Esqueixada de baccallà. Main course was a Fricandó de vedella amb xaminyons (slow cooked beef served with a gravy of wild mushrooms). Dessert was a variation of the traditional crema catalana served with stewed apples and toffee.

On table 13 the food and wine matching experience was shared with Joan Callís and Carles Picazo of Barcelona Guide Bureau (Guided walking tours of Barcelona), Quim Galan of TierraEvasion (new on the scene in coming agent catering for tourism in the Garrotxa region), Mar Martínez of Abacco Internatiional and Wine Tourism Consultant, Pol Fagés of Turismon 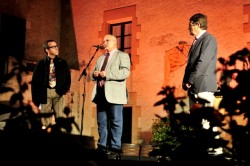 Beyond just another visit on the wine trail, Mas Macia presents the perfect setting for a holistic Catalan experience, whether it’s a tasting of their Cava stood around a wine barrel in the front garden or for those visiting in the summer they can be treated to a show of traditional dances of Catalonia. 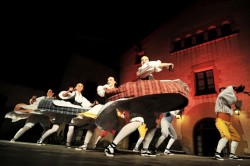 several traditional dances unique to specific catalan regions such as Pallars Sobirà, Garrotxa, Maresme and of course the Anoia region where Bohigas is located. A 10 minute break in the mid programme was a chance to try another glass or two of one of the 50 Great Cavas 2013.

Last dance was that love it or hate it Sardana dance where members of the some 100 strong audience were encouraged to join in, which indeed they did!