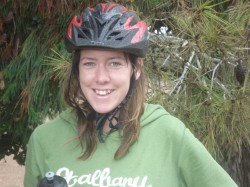 If you thought a pleasant bike ride would be the ideal way to be introduced to the ancient wine-producing region of Penedes, then think again. Having sampled some of the local wine since my arrival in Spain two days ago, I was eager to explore the winding roads and absorb some of the culture that infused the surrounding vineyards.

We set off from Bellprat, zipping gracefully past pine forests and no-hunting signs. The landscape eventually unwrapped into a flourishing vista and we freewheeled past fig and almond trees as well as extensive arable land where the soil may have been too delicate to plant vines.

The road however, got rockier and rockier, until I was jittering up and down as we made our descent into the dark woods that encompassed Devil’s Rock. 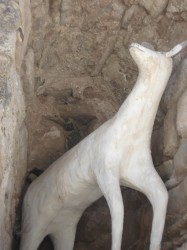 We parked the bikes and crouched down to walk along the needle soaked path, the light dipping as the forest swallowed us up.

The legend of Devil’s Rock, as explained by the locals, began with a man named Mr Tous who was obsessed with hunting a mysterious white doe. But he could never quite catch it. One day when he was tracking it, he came across a newborn baby. He took the baby girl back to his family where she grew to be a beautiful young woman. It wasn’t long before a young suitor fell in love with her and asked for her hand in marriage. Mr Tous agreed to his proposal, but only on one condition: that he hunt and kill the white doe.

The boy tried and failed for many months, growing more heart broken by the day. Finally, he met an old witch who offered him the chance to sell his soul to the devil in exchange for the doe. The boy agreed at once and later that day he had succeeded in wounding the creature. He followed its trail of blood to the waterfall where we now stood. 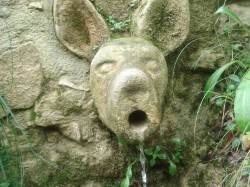 By the lake he found the injured animal lying next to his young love. The girl said that they should escape from the world to live together for all eternity. He joined her and the lake opened up, engulfing them forever.

I could almost see the trio hunched under the overhanging rock, before they were sucked down into a whirlpool and into another world. I shuddered by the dank pool; the waterfall wasn’t flowing today and the silent rocks cast eerie shadows on the muddy waters below. I wondered if the no-hunting signs we saw earlier were installed with the superstitious legend in mind.

We left the haunted place and headed back, taking a shortcut and hauling the bikes over hefty rocks. Having cycled the fifteen kilometres to reach Devil’s Rock, my legs were achingly tight. I soon dismounted and an hour later was still pushing the bike up the hill, wondering exactly what I had got myself into. 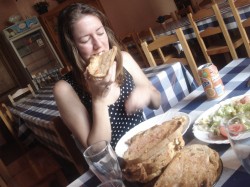 There were plentiful blackberries by the side of the road, but I soldiered on until we stopped at a restaurant called Cal Maginet about twenty minutes from the car. We were fed (butifarra with pan con tomate and a delicious salad using lcoal produced tomatoes which coincidentely we had already tried earlier while cycling past the tomato patch) from and watered, my guides chatting to owner Isabel in Spanish, while I rekindled the feeling in my thigh muscles. At last we made our way out, stopping to admire a one hundred year old oak tree that overlooked the eatery as two eccentric guard dogs barked their goodbyes.

I gladly clambered into the car, skipping the last leg of the thirty-kilometre bike ride, and looking forward to a glass of rosé wine from the Wine Pleasures cellar. We tasted a Chilled Rose of Treloar 2009 – tangy and fruity from Domaine Treloar (Languedoc-Roussillon) on our return.