Why Ribeira Sacra Wines are so Steep

Just back from the IX Congreso de Museos del Vino de España held in the delightful (and well managed) Parador of Monforte de Lemos which was efficiently organized by the team at the Centro del Vino de Ribeira Sacra. My main aim in going to the event was to deliver the opening talk at the Conference which was titled How to get more wine tourists in times of crisis and my secondary aim was to discover the Ribeira Sacra wines and region.

The long journey to Galicia from Catalunya proved to be a good source of income for the fat wallets of  Transit and Traffico with several speeding fines surely on their way in the post. Before setting off I knew very little about the Ribeira de Sacra and as soon as I arrived I started hearing about Mencia, Godello and vineyards. Vineyards, yes. The vines are planted on terraces on almost impossible gradients (80%) rising from several different rivers. The oldest terraces were originally carved by the Romans 2,000 years ago, and they are spectacular to say the very least. 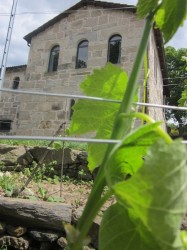 Spectacular? you might ask.  But so are vineyards in other parts of the world such as the vineyards rising up from the Mosel and the Rhine in Germany, the slope of Côte-Rotie in the northern Rhone Valley, the terraces of Priorat in Spain and the Douro in Portugal. But Ribeira Sacra is probably the most spectacular and you have probably never even heard of the region, much less tasted its wines. For centuries, the people of Ribeira Sacra have farmed these impossibly steep slopes to make wine for themselves. The ambitious few sold their wines commercially in nearby Lugo, shipping barrels by boat up the Miño river. Paved roads did not even connect Ribeira Sacra with the rest of Spain until quite recently. Of course, in other ways of transport, Ribeira Sacra was way ahead of the rest of the world. An old Roman bridge, El Puente Bibei, built around 115 A.D., is still in use today.

During my stay and within the context of the Conference I had the opportunity visit 4 wineries and taste wines at each: Bodega Vía Romana on the River Miño, Bodega Abadía da Cova opposite the “End of the World” also on the River Miño, Bodega Algueira and Bodega Regina Viarium both on the River Sil. When I tasted the wines for the first time, I thought they were delicious. The reds are made primarily of the mencía grape, as in nearby Bierzo, but these wines seemed lighter, silkier, more mineral – well the terroir is virtually all rock! I particulary enjoyed the red at Bodega Algueira but my clear favourites were the godellos and the Alvariño at Abadía da Cova.

The beauty and history of the vineyards, and the quality and the potential of the wines makes Ribeira Sacra a great place to visit. The stories behind the wineries make for good conversation at lunch or dinner. For sure you’ll be chatting about the isolation of this region and the arduous physical labor required to build (and rebuild) and work the terraced vineyards. Bodega Algueira have a good video showing people working on precipitous slopes chipping and laying granite slabs all day just to be able to plant 3 vines.

Of course one drawback is that only very small quantities of Ribeira Sacra wines available abroad. Most estates only producing 10 – 15,000 bottles per year so if you happen to see one in your local wine shop go for it! AND.. if you are looking for a memorable wine tasting tour then look no further. Get a flight to any of these airports Vigo, Santiago, La Coruña or even land in Oporto and get ready for the wine tour of your life.

Finally, I want to thank Stephen Fallows of Faisca Turismo Consulting and the team at Ribeiro Sacra Centro del Vino for inviting me to speak at this prestigious conference for wine museums (sorry Stephen!). We look forward to meeting them again at the 2012 International Wine Tourism Conference & Workshop in Perugia, Italy.