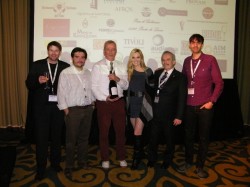 The quiz was hosted by Charity Winters of Celebrity Wine Review TV  and the wines were sponsored by Ferré i Catsús. Three wines from Penedès based Ferré i Catasús winery were served to contestants during the quiz: Cava Brut Reserve Nature, Xarel.lo and CaMerlot. Jethro Swift provided Spanish pronunciation clarification of Spanish and Catalan words. Winning team in the picture got a Ferré i Catasús Cava Brut Nature Magnum which they sportingly shared with losing teams.

For those of you who couldn’t make Oporto 2011 here are the questions. How many can you answer?

2012 International Wine Tourism Conference will be held in Perugia, Umbria, Italy from 30 Jan to 2 Feb.