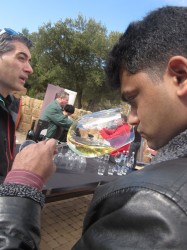 Imagine trying to sell wine in a country where 95% of the people belong to a religion in which consumption of alcohol is against the religion. We interviewed Mr. Mithil Khanolkar from FineWinesnMore in Mumbai, India after the 2011 “Buyer Meets Iberian Cellar” Workshop in Barcelona.  He told us about the challenges a wine importer in India faces.

So what are the challenges of selling wine in India? To start with, there are only about 70 wineries in all of India and only two of those produce good wine.  As a result, the first encounter with wine is, for most people, an unpleasant experience.

However in order to protect this national wine industry, the government has added significant taxes to imported wines.  The customs and octroi duties are about 300% and the excise tax is about €4 per bottle so this results in a cost to consumers of around 10 times the purchase cost!

Add to that the fact that 95% of the population is either Hindu or Muslim.  In both religions alcohol is banned. Next is the fact that the label for each wine must be approved by and registered in each state where it is sold (and each state has different registration fees). Even if the process goes smoothly, it takes time. However it frequently does not go smoothly.  We were recently trying to register the label for a wine from Australia called ‘The Accomplice’.  The label had a cartoon showing a thief stealing a car with a giant wine bottle tied to the top but the authorities said this promoted drinking and driving.  We argued back that the giant bottle in the cartoon was still sealed and convinced the authorities to change the ruling.

The final challenge is that most Indians are vegetarian and some wines are not.  Wines that are filtered using egg whites or gelatin are not vegetarian and savvy wine consumers know this. 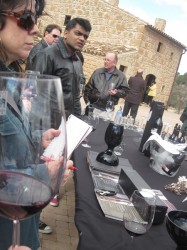 If so few Indians drink wine, how did you learn to like it? I have a degree in Hospitality Management and worked at a 5 star hotel in Mumbai called The Oberoi.  One of my duties was in the wine cellar and I conducted daily tasting sessions for the guests.  It was there I was first introduced to wine.  Later, I did Post Graduate Diploma in Hospitality Management in London, where I also worked simultaneously and learned to like wine even more.

How did you start working for FineWinesnMore? When I returned from London 1 ½ years ago, two of my friends worked for the company.  They told me the working hours were regular, the pay was better and it was more fun, and, was still related to the Hospitality Industry.  Also, since it was a relatively new company, the potential for growth would also be much higher. It was not a hard decision.  I started working as a Marketing Executive, and am now the Sales & Marketing Manager.

Did you get what you wanted out of the workshop? Yes.  Because of the Indian taxes, we need very low prices to start with.  I found three suppliers with very good value for money wines that I have put on a shortlist for our Senior Vice President (Mr. Craig W. Wedge).  He will make the final decision, along with the Founder & CEO (Ms. Dharti Desai). FineWinesnMore.