Spanish Winery Tour? At Can Rafols You Can 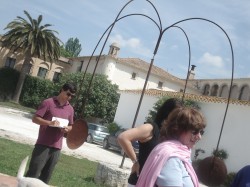 As the limestone dust settled after following the Wine Pleasures Enoturismo Bus, we began to see  the welcoming front entrance of  the DO Penedès Can Ràfols dels Caus and we were immediately greeted by two white dogs of origins unknown to me, one of which was monstrous. He was like a mix of The Beast from The Sandlot and Falkor the Dragon (dog) from The Neverending Story. And just like those two he was a gentle giant.

Our wine guide, Amanda then took main stage. English, probably a “scouser” and pretty young but had clearly been in the Catalonian region of Spain for some time. The group (that’s 9 stunning ladies from the Bruton Ladies Wine Club, Somerset, UK) was shown past a giant metal something that was an art installment of some kind. And then we gathered around Amanda (doggies too)  on an area that overlooked the main grape growing plots and a good bit more of the property. It was really awesome seeing such well maintained grounds, the mountains in the distance, and the beautiful old house that was situated a short distance behind us. Amanda did a great job explaining the philosophy and growing style of the vineyard. 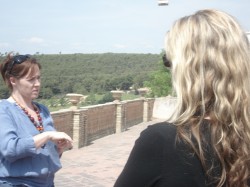 Can Ràfols  has an organic and natural way of managing the estate. To give an idea of how organic, she explained how they chose not to weed the plots to inhibit weed growth. The weeds would hopefully bring in little critters and bugs that may not normally be present in a well groomed inorganic vineyard. Those bugs and critters were then supposed to eat any bugs that would normally be present at and dangerous for the grape vines.

I am still not convinced that this process didn’t originate when someone was either lazy or just had too much to look after, to do the weeding. Either way, they use an extremely natural pest control system now, that they claim is 70% affective and helps the winery to skip out on pesticides completely. Well done! 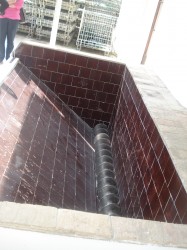 The tour continued and started feeling more like what it was. Can Ràfols has clearly been on the rise. Maybe because being organic is so trendy now. All of the “old” methods were the first things that were talked about.I guessed that we would be seeing the newer more modern facilities later.

Amanda took us on a trek up the side of the mountain explaining just about every detail of the natural environment and how it affects everything they produce. From the limestone that the roots of the grape vines clung to giving the wine a slight mineral taste to the Mediterranean Sea sending salty breezes from the east that helped moisten the crop. It was all explained.  And though I wasn’t expecting to learn so much detail, I am so happy that it was shared with us. The knowledge of the arid environment that the grapes were grown in really shined through when trying to pick out complex flavors and aromas during the wine tasting. 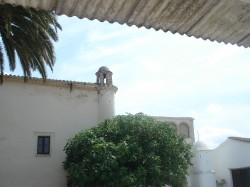 We made our way back down the mountain where the group was finally introduced to the entrance of the new facilities. And what an entrance it was. The wine production area and cellar had literally been carved out of the side of the mountain. The doors we were to use to gain access to the interior were made of solid granite. Both of them being at least 2ft thick, slowly parted in the middle and allowed us to enter autonomously. The property’s owner wanted, “the mountain to open up and welcome you in”

Amanda detailed the interior in the same manner as she had the exterior of the property. Every vat, walking platform, and natural limestone wall was talked about at length. We definitely learned more about the operations of Can Ràfols dels Caus than we had imagined. 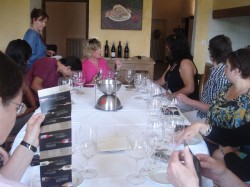 Then the cellar at the rear of that facility was immense. The ladies were introduced to the aging barrels via a 2nd floor balcony that overlooks the room in its entirety. The first sensation to hit me upon entry was the rush of cool and humid air. And after the initial oooing and ahhing we moved down to the main floor where we could really soak in the entire room.

The original sensation presented by the cellar had coalesced into a magical aroma of french oak barrels, the rich grape smell of aging wine, and intense smell of earth. The weight of the mountain made the walls leak water and the atmosphere of the room press down on you.

It was a wonderful place. 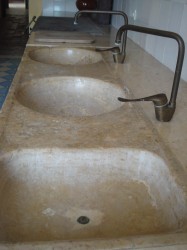 Next we were led out of the cellar and up towards the main house of the estate. On the way up we passed one of the cooler features of the property. A concrete ball at least twenty feet tall held up a corner of a building above. Amanda asked the group if we had eaten breakfast and if we were feeling strong. After a short laugh, we along with the Bruton Ladies Wine Club were instructed to put our hands on the giant sphere. Amanda counted down from three and we started our counterclockwise rotation of the concrete ball. It had no functional reason for being on a vineyard, but really ended up being a highlight of the tour. It brought the group together as whole, which made the coming wine tasting much more relaxed and enjoyable. It was a great addition to the estate.

We finally made it into the house. It was a beautiful place that was a mix of kind of old and really old styles. Kim and I being from the U.S. still aren’t used to houses being described as, “one wing was built in the 15th century and the other in the 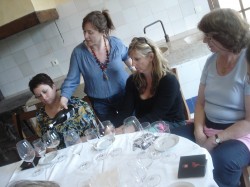 18th century”. But the place was beautiful restored and wonderfully decorated with original paintings and vino themed statues.

We finally made it into the wine tasting room. It was full of light and warms colors. In the center of the room was an oval, linen covered table with room for eleven. We sat in anticipation of the wine that was soon to be poured into our waiting glasses. See out tasting notes on adegga and vinogusto.