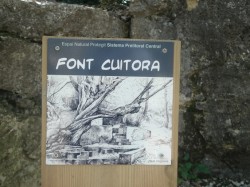 The Font Cuitora is situated just off the centre of La Llacuna, serving as a popular village spring. We arrive to find two locals filling up eight five-litre bottles. With two down and six to be filled, we make a hasty u-turn and return five minutes later when the spring is free.

The font joins five others in the area, the highest – Font Des Las Canals – scales 900 metres, although I’m told the road is too perilous to drive up in anything but a Land Rover. Being the highest, it’s the best. 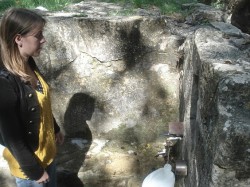 Cuitora from which we fill our own five litre bottles is also very pure, aiding in renal problems. The key to the water’s healing properties is the high content of limestone of the mountains of Penedes and the Anoia region. Supposedly, the limestone, containing mineral deposits such as iron and calcite, balances out the pH of the water, therefore purifying it. I try some, relishing the absence of that pipe-water taste and the perfect temperature in which the water flows from the font. 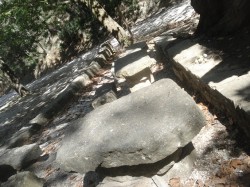 The surrounding architecture of the sight looks glorious in the September light. Ragged stone chairs and tables sit welcomingly under a 100 year old oak like modest ruins. The oak and its twin, which overhangs the font, are an unusual species I have never seen before. The swollen plump trunks look contently familiar to those on British soil, but the leaves are much paler, similar to those of a silver birch. Like the blue forest in Australia, trees residing up in the mountains seem to absorb the light blue shades of the low mists, giving them an sinister disposition, even in broad daylight.