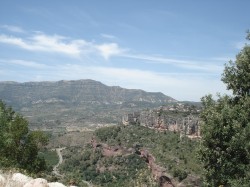 The unique landscape of the Priorat region is best known for its wine and olive oil.  However, it contains another hidden gem in the town of Siurana, a city dating back to prehistory as a flint workshop and later as a Muslim stronghold, specifically La Siuranella Hotel and Restaurant.

Driving up mountain switchbacks to Siurana, we passed slate quarries and sheer cliff faces. Arriving at the edge of town we were greeted by century old stone ruins from a Muslim outpost. After a short walk through the picturesque stone buildings we reached La Siuranella.

La Siuranella, a hotel and restaurant, holds one of the best scenic vistas of the Sierra de Montsant and the bustling Siurana river below. The young hotel started in 2005 is managed by a young husband and wife team, with Anaïs overseeing the hotel and Pau serving as the chef of the first floor restaurant, Els Tallers. 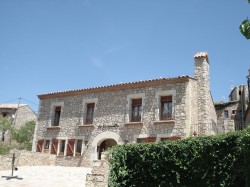 After a warm greeting, we were shown the hotel rooms named after wine grapes such as Merlot and Cabernet. Decorated modestly the rooms had plush beds and simple layouts.  The real draw though is the view, for the slightly higher rate of 125 euros for a double room or 95 euros for a single room you have a view of the picturesque valley below.  From a private balcony you can peer out over the vast expanse of terraced vineyards, mountain peaks and the river below.

Not to be outdone, Els Taller reminds one of a wine cellar as it touts a ceiling of arched brick with wood beams and a lovely brick bar.  While a small space capable of hosting up to 25, it has big ambitions when it comes to the courses. Chef, Pau, trained in France provides a unique French flair to the plates, while using mainly local ingredients. 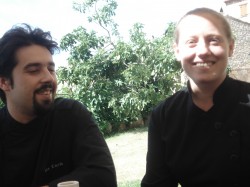 Pau & Anaïs your hosts at the Hoel La Siuranella

Starting off we sampled an amuse bouche of a cucumber and yogurt soup and mackerel with an olive, green tomato and mint sauce. While the mackerel proved a little overpowering, overall we found the selection a refreshing way to start the meal.

The next item on the menu, a seafood vegetable medley, included clams, mussels and oysters in a parsley juice sauce. The beautiful presentation and vibrant colors immediately drew our attention, and each bite lived up to that initial reaction. For our wine pairing the chef chose a 100 percent grenache blanc wine from Montsant, a 2007 Mas Franch produced by Margalef.  We particularly enjoyed how the wine opened up with the dish, and found the pairing to be nearly the best of the day. 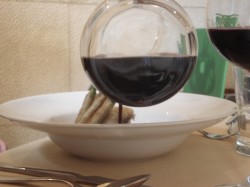 To follow our medley, the chef sent out monk fish with filo wrapped asparagus con queso, which had a warmed rice venere consume drizzled over top. To compliment the course we tasted a 2007 Octubre produced by Cinglesblaus in Montsant. After just a few bites and sips, the dish and pairing became the most memorable of the meal as the meatiness of the fish was complimented by the delicacy of the wine.

For our entree, we received foi gras, onion compote and pigeon with a cherry and grenache sauce. As a pairing, we tasted a 2007 Mas D’En Compte produced by Cellar Cal Pla in Priorat. The pigeon proved succulent and tender. However, it received mixed reviews from the table, in part due to members of the party viewing the bird in its entirety prior to the meal while in the kitchen interviewing the chef.  The wine held its own with a nice oakiness, but did not overpower the dish.

To end the trip, dessert included a chocolate brownie, chocolate flan and mandarin sorbet with an NV Especialitats Mas dels Frares produced by Cooperative Cellar of Gratallops. A tasty end to the meal, we found ourselves craving a little vanilla ice cream or even pistachio with the brownie. The wine proved a nice compliment, and made some of the party rethink their views on dessert wines. 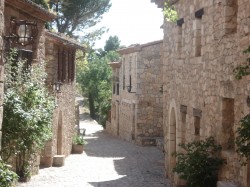 The welcoming hosts and scenic vistas, made La Siuranella a memorable experience and a nice luxory in the Montsant mountains in the Priorat Region in the province of Tarragona, Spain. Use the hotel as a base and visit impressive nearby wineries and wines at Mas Perinet, La Conrería d’Scaladei and Baronía de Montsant If you are visiting in summer make sure you get hold of David at Cornudella Turisticfor a 4×4 trip down to a secret bathing spot on the River Siurana – make sure you try out the natural shoulder massage!

To finish up a short video from the Restaurant Els Tallers showing you the delicious Pigeon dish matched with one of the local wines.