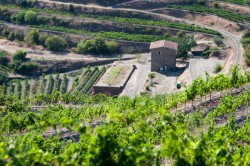 Loading into the car at a quarter to 7 in the morning I say to myself, “Today is going to be a great day!” – As I subscribe to the school of thought believing verbal reinforcement translates into actuality. Anyway, we load up and we’re off. We are on our way to tour two different wineries today, both located in vastly different terrain than here in the Penedes. We are going to the famous Priorat wine region, where steep slopes and dominatantly slate soil provide for quite an extreme contrast to that of the rolling hills and sandy soil of the Penedes.

It is quite a long drive (at least for me as it’s my farthest trip by car since here in Spain). Gazing out the window, trying to occupy my mind with something, ANYTHING, I begin to notice that in every town, large and small, the structure reaching highest is that of the town’s Church. This doesn’t surprise me though, it seems a very “Catholic” ideal which is the dominant religion in Catalunya.

Another worthy mention is a pair of roadsigns, one on the way into a tunnel, and one on just on the other side. The second sign is the one that I feel needs mentioning as I’m amused BOTH times we pass through. The first sign is your standard picture of a headlight with beams coming out of it indicating, “turn on your lights” often seen upon entering a tunnel. The second, however, is quite amusingly unexpected. It is, once again, the standard picture of the headlight but with an added bonus. A ” ? ” sits just next to the headlight picture. “Are your headlights still on?” The ” ? ” is almost symbol poking fun at those that didn’t instinctively turn them off. 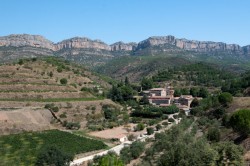 Coming into the steep mountains of Priorat, the road narrows and bends quickly this way and that – barely allowing for two cars to pass. (Mental note – never bring a dually to The Priorat) Further into the mountains, I begin to notice that each, off in the distance, is “capped” with a rocky mass just above the tree line. The caps are speckeled in different shades of slate (rust, grey, and tan), making for quite a beautifully unique sight. First twisting up then snaking our way down, we narrowly miss an oncoming car whos driver has taken quite a liberal share of the road.

We arrive at a small cafe in Poboleda and sit to wait for our hosts. The van, lacking four-wheel drive, is ill-equipped to handle the trek up into the vineyard and to where they make the magic; which it must take to produce such fine wines in these conditions Having a cup of very strong, black coffee I take notes of the journey which would have made even the strongest of stomaches quiver. The town of Poboleda has only 400 inhabitants, a vast difference from the thousands that lived here before the grape plague in the late 19th century. The plague was apperently started by the French. 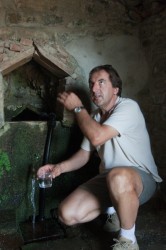 Up drive our very enthusiastic hosts Salvador Burgos and Conxita Porta, we pay our bill and climb into our transport. heading up the mountain on a rough dirt road the notes I take prove worthless as they are unreadable. A flock of birds fly through the vally below as we pass one vineyard 70+ years old. No doubt that they are the oldest in town. Not only does this region produce world class wine, but they have clean, pure natural springs gushing out cold water. Upon arrival to the vineyard we are motioned out of the car and into a small rock hut. Opening the nozzle Salvador insists that we taste, and, I must admit, it is some of the most refreshing water I have ever tasted. One of the key ingredients in making such high quality grapes. Here I must note that neither of our hosts speak a lick of English and I’m forced to translate to myself as best I can.

Three major qualities stand out about the vineyards here at Celler Burgos as opposed to, say, “Artcava” in the Penedes. First the soil is virtually nonexistent. The roots of each vine are forced to reach down 20 meters in some places to find enough nutrients! The second is the extreme slope at which those harvesting the grapes are forced to deal with. 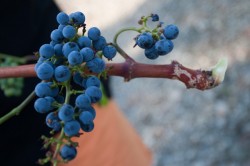 A grape vine after being eaten by the "Phantom Goat."

From the winery to the top vineyard rises 130 meters in altitude over a distance of less than 0.5 km! Some corners are too sharp to make without backing up to make them. Finally, great bunches of grapes grow from these, seemingly nutrient deprived, vines. So large, in fact, that I am surprised that they eat them at will! There is even a “phantom goat” that Conxita swears that she’s never seen that comes to eat the grapes late in the night. The only pieces of evidence are naked stems and a broken length of vine or two. 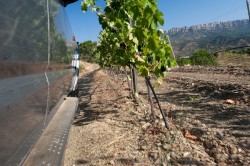 Extreme Wine Tourism in the Priorat.

After touring the vineyard in what Anthony playfully describes as, “Extreme Wine Tourism,” we arrive at the first of the two “bodegas” which make up the winery. Inside Salvador very emphatically explains how wonderful their machine for separating the grapes is. He goes on, for what seems to be 20 minutes, about how easy it is to clean and reassemble it is. It may seem longer to me; my mouth is watering in anticipation of tasting the famous Priorat wines. He also explains to us how gravity is taken fully advantage of in the transportation of the newly fermented wine into barrels for aging – Simply brilliant! This system allows a minimal crew to produce 12,000 bottles per year! Next we are taken into the Cellar where the barrels and bottles are kept. The room is artfully illuminated and the barrels asthetically stacked. Boxes of prepackaged bottles line the left side of the room, while the individual bottles rest horizontally in racks along the right, each adorning their vintage clearly on the cork’s top. 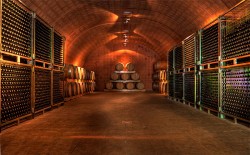 The barrels are displayed along the far end of the cellar awaiting the birth of it’s vintage. We are told that 2007 was an exceptional year for “Mas Sinen,” their most popular variety. 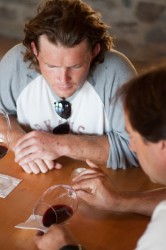 Following Salvador back to the first bodega, I notice that the whole place is powered by a single generator fueled with Bio-Diesel – Once again, simply brilliant! In the front door, up some steps, and into the tasting room we are led. The table is fashionably pre-set with elegant red wine glasses and small dishes filled with plain crackers. The crackers are for cleansing the pallate so that each sip is as flavorful as the first. Anthony responsibly chooses the “swish and spit” method while Nic and I allow for the relaxion that comes from the consumption of fine wine. Making sure not to be the first to finish my glass (although this is quite hard given the full-bodied, richly dry taste that I’ve grown to thoroughly enjoy) I politely try not to “wolf it” down. At first taste, a tobbacco-like, pleasantly pungent flavor, yet after allowing it to “lie down” it softens nicely into more of a dark berry flavor. I must confess that it is one of the best that I have ever tasted! Anthony then breaks out the video camera and interviews our hosts who enthusiastically abide.

Once the touring, tasting, and talking is over we are given two large bottles of the spring water, a box of the prepackaged wine and business cards. Salvador bids us a fond fairwell and we are taken back down to the cafe where the van awaits us. We’re off to Gratallops for part 2 of this Priorat wineries tour… To discover othere winery visit options in the Priorat take a look at Priorat Tourism Board web site.

Here’s a video of us in the tating room talking about wine and wine tourism at Burgos Porta. It’s a mixture of languages. Enjoy!