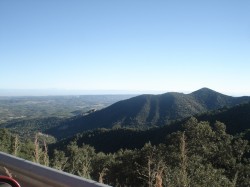 Cuenca de Barbera, or Conca De Barbera in Catalan is located south of Catalonia, in the province of Tarragona. Conca means ‘hollow’, so named as the basin surrounding the river valley is lined with mountains and hills, sealing the capital Montblanc in from the outside world. Approaching the region, we reached the lip of the basin, and were rewarded with the full vista of the lush lands of C.B, as if it were the hanging gardens of Babylon waiting to be discovered. Because of the guarding mountains, C.B has it’s own microclimate, which of course is ideal for planting vineyards.

‘We need to get to the other side of the basin’, my guide said, pointing, and so we did; whizzing down the hill and into the bowl like a giant-scale pirate ship ride from a theme park. Conca de Barbera is scattered with wine cathedrals, designed by the disciples of Gaudi in the first half of the 20th century. We passed one, its clean walls and minimal motifs reminiscent of his modernistic influences, rather than his earlier gothic 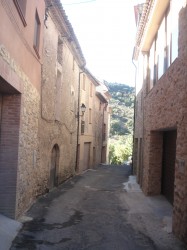 architecture. Despite being blandly neutral in colour, they served as very smart wineries, and we must have passed about five or six before we started up the mountains on the other side of the basin. As we climbed we passed the walled gardens of the Poblet Monastery. Wine production took off thanks to the monasteries founded in the Middle Ages, and in the 12th century, both the Knights Templar and the monks from Poblet worked in the vineyards. Poblet belongs to the Cistercian Congregation of the Crown of Aragon… I wondered if perhaps it had something to do with that bloke from Lord of the Rings, but kept my thoughts to myself. We 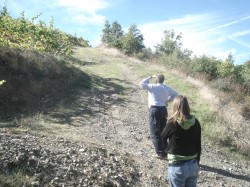 finally arrived at the village of Vilanova de Prades, a village with a population of 300 and tightly woven streets that are magnificently conserved in the altitude of 900 metres above sea level. We thought to stop off in a cafe and found our guides sat inside, enjoying a morning cup of coffee. Jose A Vega, the owner of Vega Aixala and Jacob Jorda, the winery’s active partner welcomed us and set about giving us a tour of the village before we were to travel up to the vineyards, which are actually on the border of C.B and Priorat. As we looked around and drove up to the vineyards, I tried to image what the site would be like at the end of the 19th century when the phylloxera virus hit the area, drawing an end to the boom of wine production that exported local wines and spirits to America and Northern Europe. The region bounced back remarkably quickly, and Conca de Barbera achieved official D.O status in 1985, the year of my birth.

Because of the height the harvest hadn’t even 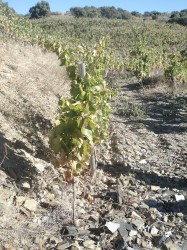 started yet. We chugged along the rocky slopes in between the vines and saw only one man who was beginning to pick the grapes. The terrior of Vega Aixala is as rocky as you can get and the soil was littered with large slates. These slates reflect the heat and enable rainwater to drain between them to sink down 10-15 metres below the surface. This water attracts the vines’ roots, which don’t usually grow deeper than one metre, and so a reserve of water is available to them whenever they need it. There’s no need for irrigation and the stony water gives the wines a mineral quality, meaning they’re robust with bundles of structure and complexity. The south-facing slopes and poled vines give the plants lots of sun and ventilation to avoid disease. Although the terrior is ideal for producing good quality wines, it isn’t so good for mass production, and there is no choice but to harvest by hand as a machine just wouldn’t be able to take on the slopes. 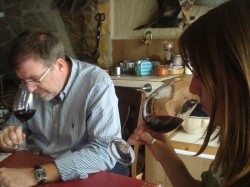 Vega Aixala practise organic agriculture – by planting weeds in the corridors between vine rows – they attract insects away from the grapes. The 9 ½ hectares are sheltered by overlooking Montsant (apparently the stairway to heaven), and the numerous grape varieties; grenache, pinot noir, riesling, cabinet sauvignon… The list is endless. We wandered off for a bit, sucked in to the beauty of the location. Dry stones walls, flourishes of butterflies, and blackberry and rose hip bushes, surround the vineyards. Jose drove off in the jeep and there was a moment when we thought we’d lost him before Mr. Jorda started calling ‘Pepe’ out to the bare mountains while we slowly baked under the hot sun. Eventually he appeared over the crest of a hill, and pulled up beside us.We taste grapes, pick leaves to practise leaf-identification before sampling three of Vega Aixalas’ wines back in Jose’s kitchen, with his three dogs watching us from the doorway and various old farm tools hanging from every wall.