In Search of Spain’s only Sparkling Red Wine 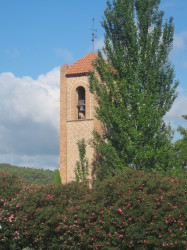 Journeying through the countryside in the car we watched the mountains pass by. Eventually, in a little village, around the corner from a church and down a little street we found the location for the winery. But all we saw was what appeared to be a street of houses. Surprisingly enough, one of those houses was what we were looking for: the Lobban winery.

This is the smallest winery in the region, possibly in Spain, where all stages of the process are done by only one woman; Pamela Geddes, who originally comes from Scotland. She has worked with various different wine makers, in Spain, in Australia and in Chile, and she studied micro-biology at university. She has therefore gained the knowledge and experience in order to create her own unique wines, which are all traditionally hand-made. 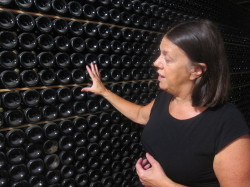 We entered the winery and seemed to see everything in one glance, except there were many details around the space; on top of the wine bottles and between them were objects such as thermometers, pots of yeast, cleaning utensils and other things, including boxes. It was interesting to look closer at the many items lying around.

This was in the main room, which has the racks where the sparkling wines ferment, with crates for putting bottles after they have been shaken and then the old-fashioned pupitres where the bottles are left top-down so that the sediment can settle in the end to be removed. 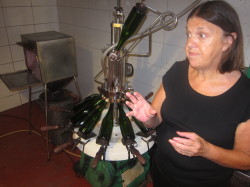 In the smaller room at the back, which can also be seen from the entrance, were a couple more elements of the winery. There we saw the refrigerator system to keep the temperature low and also the machine used to disgorge and cork the wines. Again, this is an outdated item where the machine only helps the winemaker to complete the action by hand, but in this case it is still in current use. 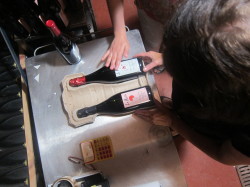 Pamela then showed us where she stuck the labels on the bottles and explained to us about the design. The first one she described was for La Pamelita, a sparkling red named after herself, whose image is made of several elements, including a footprint, stairs and a cross, which all have some significance to the company and its location. The other sparkling wine, a rosé called La Rosita, has a simple carnation on a pink background. These labels were designed by a local Catalan designer.(see the video for the full story behind the labels)

Pamela only makes 8000 bottles per year and distributes them mostly in the UK, both England and Scotland, with only a small distribution in Spain. So look out for her sparkling wines and also her still red, the more masculine el gordito, which can be found through Indigo Wines or the Lobban Wines website.

In Search of Spain’s only Red Sparkling Wine from Wine Pleasures on Vimeo.