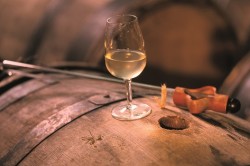 Champagnes’ place in the popular culture originates in the cellars of the Hautvillers’ Benedictine Abbey. Fermentation of wine produced there would stop prematurely due to exposure to low temperatures common to northern France harsh colder seasons. As the spring approached the dormant yeasts enclosed in the seasoning bottles would start consuming sugars again with carbon dioxide as a side effect. Pressure inside the containers would raise eventually leading to severe explosions shattering vast stocks of wine, giving this primitive sparkling wine the nickname: “le vin du diable“. 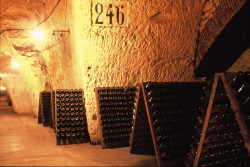 Here is where the famous Dom Perignon enters the stage. Widely known as modern champagne’s first propagator he was in fact hired by Hautvillers’ abbot to find a solution to the devastating bubbles problem. Successful as he was in this field hadn’t it been for the English, his name would be forever lost in the tides of history. And perhaps so would be the effervescence which makes champagne an object of universal praise today. English upper-classes – very fond of French wine – would witness the same process of unintended double fermentation as their southern neighbours, but what was seen as an obvious flaw they had forged into a much desired merit.

In 17th century technological advances in Britain enabled production of durable glass bottles in coal-driven ovens. Together with implementation of cork stoppers and scientific approach to fermentation process, the way was open for champagne to take its place in the world of viticulture. In 1662 an English scientist, Christopher Merret, presented his work on wine production describing what today is known as méthode champenoise, the most sophisticated method used in sparkling wine production. But it would be a century more until champagne’s inevitable conquest of European tastes had been complete. 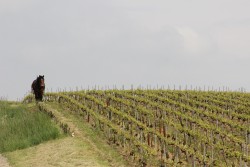 The champagne spread from the palaces of 18th century aristocrats to engulf most of the continent. As production slowly but constantly shifted to sparkles in north-eastern France the Champagne Houses were founded. With developments of the Industrial Revolution those soon-to-be giants of the wine industry were able storm the holds of the emerging middle-class. Susceptible to Europe’s varying tastes (sweetness levels dropped reasonably for example) champagne has changed a lot. The fashion, upheld by the strict production control forced with introduction of the appellation in early 20th century, drove sales to unprecedented levels. Today, champagne still retains its position as a symbol of things select and exquisite in the popular culture.

Find out more about champage at the International Wine Tourism Conference (IWINETC) by clicking on the Conference programme below: 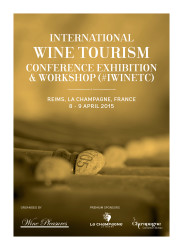