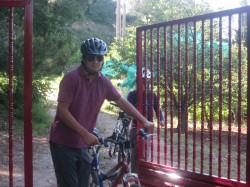 The ride along the high Penedes region of Spain brought us misty mountain top views, lively local flora and fauna, and short history lessons along a fun and sometimes challenging route. Spotting an eagle soaring in a sea of light blue sky on the way out of the Wine Pleasures Estate shed an early light on the path that was laid out in front of us. From the onset of our journey the history lessons and views became as regular as the pedaling that we used to power our way up the mountain. It was a nice balance of information and pleasant riding that afforded us the opportunity for plenty of silent contemplation to digest all the wonders that were sprawling in every direction.

Montserrat was the first of many startling views and without Wine Pleasures front man Anthony pointing it out we may have missed it. It’s jagged peaks rose ominously in the distance and the haziness of the day added to the mountains mystique. 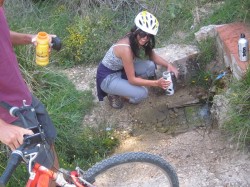 Around the bend and further up we left the paved road for a gravel one. We wound our way up about three-quarters of the mountain when we met another wonderful view from high above sea level. The sight in front of us was splashed with picturesque green valleys that divided the range and led the eye to the point in the horizon where the Mediterranean Sea was just barely visible. This vantage point was hard to leave due to the perspective that it gave us on everything far below.

Continuing up the path we came across amazing cold and crisp fresh water springs, ancients wells, and even older oaks. The Tree of Ancosa 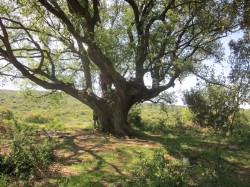 is a one-thousand year old oak that watches over the highest altitude vineyard in the region. It has also been used by the locals to give newborns a bit of extra positive energy once they touch it. This ritual has gone on for centuries and is sometimes still practiced today.

Up the path a short way we came to a natural pot hole where the earth has opened up and shown its dark interior. The pot hole is surrounded by lush brush and wild flowers on the exterior but once you gaze inside you can see that darkness takes over and the moss on the walls and dense spider webs await anyone daring enough to enter its depths. 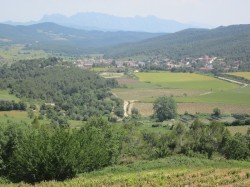 The rocky opening in the earth was followed by our short ride and arrival at a monastery that was built in the 12th century.  Monks had only occupied the area for 13 years between 1155 and 1168 and moved out due to a lack of water. They left behind impressive stone walls that rise up out of the ground. The natural landscape has reclaimed the former house of worship leaving it occupied by giant oaks and dense foliage of green and brown.

We had made it to the other side of the mountain and were able to enjoy some exciting downhill mountain-biking. Hands held tight and ready to break we quickly rolled down through dirt and rock where we came to my favorite view of the cycling route. The valley on this side of the mountain was a patchwork of grape vines that shined all colors of green in the sun, golden wheat fields that flowed as if waves in the ocean and grand oaks and pines that followed streams along the floor of the valley. The village of La  Llacuna was situated on the right side of the sprawling landscape and the light colored buildings with red clay tile roofs popped against the deep greens and bright yellow of the surrounding land. 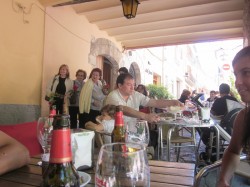 The ride into town was paved and pleasant and the cold beer that we were served once we arrived capped off the perfect day. With the beautiul flora and fauna, the short histories of ancient ruins and the breathtaking views Wine Pleasures surpassed our expectaions of a wine country bike tour.

Below you can get a better idea of the time we had on a wine country bike tour with Wine Pleasures in the High Penedès region of Spain. Enjoy!