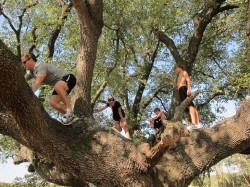 When I arrived at the Wine Pleaures Estate for the 25k-Mighty Oak Wine Country Bike Tour, I didn’t know what to expect.  It was a surprise to find that my fellow mountain bikers were from Iowa, the U.S. state home to my mother´s entire family.  A small world indeed!  Andrea and Bryan McGinness were in Spain on holiday with their three children, celebrating the recent graduation of their eldest son with Bryan´s brother and wife.  The McGinness´s own a fine wine shop in the capital city of Iowa and so had great interest in the local wineries and cava varieties.  After introductions and reminiscing about the Midwest, we began the first leg of our bike tour, a laborious but doable 3k climb up the mountainside.  Once to the top with magnificent views, we left the paved roads behind, diverting to back trails that only the locals know about.  With many ups and downs including a handlebar conundrum and a tumble 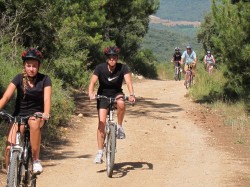 off-track (no it wasn’t me I swear!) the trip was exciting, informative, breathtaking and most importantly, good ol’ fashion fun!  The surrounding Spanish countryside with a backdrop of impressive, jagged mountains more than made up for the sunburn I would suffer from later that evening.

25k may seem like a long way to bike, but with intermittent breaks at the Well of Ancosa and two refreshing natural springs that kept me well hydrated, I had plenty of energy to climb those final 5k back to the start, though apparently not as much as our two touring athletes who beat everyone by a mile!  The highlight of the tour for me (other than the cava) was visiting the 1000-year old Mighty Oak.  Legend tells of a time when the Oak was part of birthing rituals in the local villages.  A piece of bark cut from the tree would be placed on the forehead of the babe, transferring the Oak’s long life and good health.  In modern times a simple hug around the massive trunk is thought to give some of the Oak’s energy to the tree hugger.  Maybe that’s why I felt so energized at the end of the tour.  Or maybe it was the cava that had me singing praises.  The cava breaks both at the village (Mascaró Brut Nature) and at the conclusion of the tour (Llopart Brut) where invigorating and revitalizing.  And of course the cava was absolutely delicious and well worth the effort. 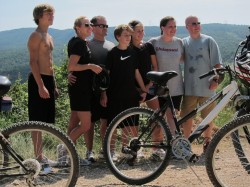 When I asked the others about their favourite parts of the tour, responses varied from the views to the cava to the downhills!  While everyone seemed to have enjoyed different segments more than others, the general consensus was highly positive all around.  The tri-athlete of the group even exclaimed it was the best thing they had done since arriving in Spain.  Bryan, who supposedly hadn´t been on a bike in roughly 15 years, may not have entirely agreed with her, but everyone ended the tour with a sense of satisfaction and accomplishment (they had just biked uphill for 5k afterall).  Departure was full of smiles, laughter at some memorable mishaps and perhaps a secret longing for the cool of the pool…and maybe just one more bottle of cava.

All in all the Mighty Oak Wine Tour was a wonderful adventure that I would repeat in a heartbeat and strongly recommend to others.  Changes or suggestions that I would make for my next wine tour?  Remembering to wear sunscreen!