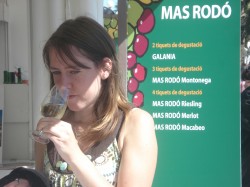 My wine tasting knowledge was happily expanded this weekend at the 30th Mostra de Vins i Caves de Catalunya which was part of the Barcelona Merce ’10 festival. Lines of quaint white marquees facing the harbour (in the old part of town) greeted us after a hike down from the Olympic stadium; a microcosm of Catalonian wines from across the region. After spotting the unsightly spectacle of a naked man (with tattooed on pants) waltzing down towards our destination, we set about getting a free ticket from Joan, one of our inside contacts at the event and went for our first glass of vino – a dry white that was slightly too warm. Neither the less, the day began (literally) warming up along with our choice of wines, and, after a slightly disappointing cava, we discovered some real gems, particularly a rose with a bouquet of fruits of the forest and a fine organic cava c/o Sant Sdurní D’Anoia based winery, Addaia. 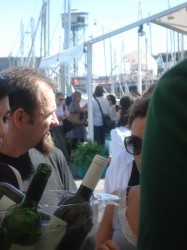 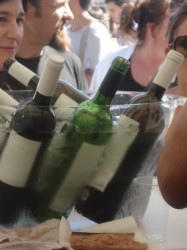 By this time I had elected to move onto the reds, and began to swirl my glass, catching onto the habit thanks to the surrounding crowds of wine enthusiasts, feeling like a tipsy Jilly Goolden. The people-watching didn’t disappoint and a sea of mullets, or rats tails as my family used to call them appeared. Not quite a full eighties mullet, the bohemian haircut is still quite fashionable amongst the Spanish.

The sun was beating down as men with big bellies and red noses wove in and out of the throng, and we began to network, snapping photos at every potential ‘punctum’ (a photograph of the unusual, one that causes you to take a second look), and believe me, there were scores of them thanks to the eccentricities of the attending Barcelonians and wine tourists. 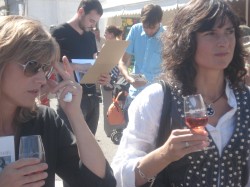 The reds were a little on the tannic side – for any wine novices you can measure this by how much of a chalky texture it leaves in your mouth – but they were equally full bodied, ‘full of nose’ and slowly aged. We sampled a cava to dissolve the taste of the previously disappointing glass, and I was taught to waggle your tongue up and down (inside your mouthful of cava!). If the bubbles sting your tongue, then it’s too young. If they enliven your taste buds, then it means it’s a good bottle and has probably been aged for 30 months or so – on it’s lees that is! 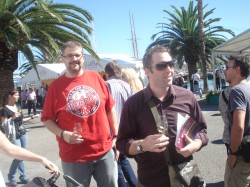 We met a couple of guys who were launching a TEFL or more specifically an ESP (that’s English for Specific Purposes not the other one you may be thinking of) course for Spanish wineries to improve their English titles English for Winemakers. One of them was from Plymouth who’d been living in Barcelona for the last eighteen years, and so he had a strange mix of accents. This was followed by a, slightly shaky, filmed interview between Anthony and two architects, named Carles Sala and Relja Ferusic, who will design a winery for you should you be that way inclined. Mas Rodó (DO Penedès) is one to visit in the just outside the High Penedès village of Sant Joan de Mediona at around 600 metres. 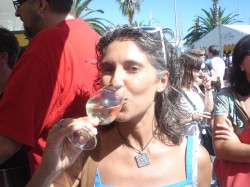 The origins of the annual Merce festival are a celebration of the Patron Saint of Barcelona, the Virgin Mary. Merce translates as ‘Mercy’, the Catholic faith believing that when the Virgin Mary appears to someone, she is showing them mercy or blessing them with good fortune. Legend has it that the Virgin of La Merce banished a plague of locusts from the city, and, thanks to the yearly celebration, the plague has not returned to the city since the party began back in 1687. The festivities aside from the wine tasting tents are spread over four days, focusing on popular Catalan and Mediterranean culture including music, fireworks, parades, dancing giants and human towers, but to mention a few. The party is a large-scale production of the Fiesta  Mayor that all the villages put on, to make the most of having a few days off and pay tribute to the summer days.