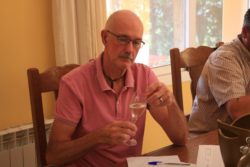 An ex. PE Teacher, Restaurateur and Professional Football Scout (for Liverpool FC), Colin Harkness lives in Alicante Province. He has been writing about the Sparkling and Still Wines of Spain for 20 years. In 1997 he started ‘Cork Talk’, the dedicated wine column in the chain of English Language Newspapers, Costa News Group SL,  which he still writes today. Colin has also written over the years for numerous magazines and other publications. Still working in the media, he guested as the Spanish Wine Consultant on several English Language Radio Stations based in Spain and two in the UK. He now has his own show, The Fine Wine & Gourmet Dine Programme, on Total FM 91.8. Colin has been judging wines nationally and internationally for ten years, and he is also active in Wine Tourism.

My top Cava has to be Cava Reyes de Aragon Gran Reserva made in Calatayud ‘Of venerable age and yet still lively to the point of being vivacious. This, coupled with extra body, mouth-feel and intensity of both aroma and flavour made for a glorious mouth-full, with a refined and elegant finish.’

I was pleased to have it confirmed that generally my consistently favourite style of Cava is that which has had 30 – 60 months en rima.  – however I did also mark highly out of this category. Clearly, this is an indication of the high standard of the Cavas submitted, and therefore, of course, of the competition!

For example I also loved the Freixenet Casa Sala, proving that big can be beautiful, as well as Gramona Imperial Brut Gran Reserva 2011, which I thought outstanding, and 2006 Gramona Celler Batllé though it’s slightly closed nose brought it down a little, for me.

As a general comment I hope that readers gain more insight into the nature of Cava – it’s clear to me that whilst there are, of course, excellent young Cavas, it’s often best to look to the Premium Cava category, those which are termed Reserva and Gran Reserva (including, of course, soon, those which will qualify for the new designation, Cava de Paraje Calificada). Mostly, these Cavas, which have had extra aging on their lees, continue to satisfy consumers’ refreshing, celebratory requirement whilst also adding extra dimensions of depth of flavour, complexity and character.

I greatly enjoyed serving on the judging panel of 50 Great Cavas. I found the Cavas entered were stimulating and the interaction with fellow professionals, inspiring. A keen advocate of Cava, I am delighted to see that the quality continues to progress. Cava rightfully takes its place on the pantheon of the world’s fines sparkling wines!

Join us on LinkedIn