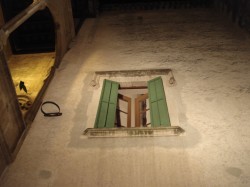 Nestled next to the Penedès mountains and surrounded by old vines, the town of Torre – Ramona (Subirats) holds a captivating appeal. At the heart of the village lies an imposing three story house, which originally belonged to the richest family in the village and dates back to the 17th century. Servant houses nearly as old surround the expansive house and shelter it from the town square. Truly a perfect setting for a night of Cava and jazz music. 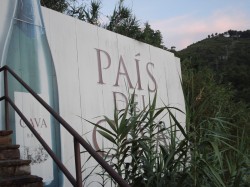 Upon arriving to Torre – Ramona, we followed the crowd up stone steps to the front of the main house and into a grass covered courtyard. While the audience slowly ambled in we read about the night’s artist, Maria del Mar Bonet. Born on the island of Mallorca, she studied the arts in Barcelona and has loyal Catalan following of her music. Looking around the courtyard it seemed quite an accurate statement, as it appeared the entire town and even folks from the surrounding villages had turned out for the show. The audience’s relaxed mood came in part from the beautiful evening with the purple hues of the setting sun, a soft breeze and willowing trees marking the night.

Once the crowd had settled and the lights around the courtyard dimmed the event organizer (actually a cava producer – Pere Guilera)  took the small podium to introduce Maria del Mar Bonet. Taking the stage with her pianist, Manel Camp she gave a brief thanks to the organizers and town in Catalan then softly began to sing. 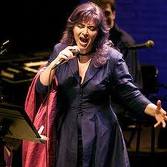 Serenading us with songs of love, hope and loss the only interruptions came from the heartfelt applause from the audience between songs.  Every few songs Maria del Mar Bonet would stand aside and give the stage to her pianist, who played his solos with gusto and charm. The music, best described as Meditarranean Jazz, enchanted the audience the entire night, and even the few gusts of wind hitting the microphones only added to the magic. 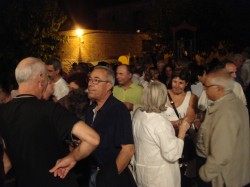 It seemed no one wanted the night to end, as Maria del Mar Bonet returned not once or twice but three times to standing ovations for an encore.  After her last encore the crowd remained standing to cheer her off the stage, and then exited the courtyard into the cool night air.  Rather than end there, the organizers had teamed up with a number of local Cava producers to present the audience with chilled Cava, ripe peaches, and coca – a sugar dusted dessert bread.  Groups broke away to chat  about their families, the concert and the wonderful evening. Tasting the sharp bite of the various Brut Nature Cavas on offer, the mouthwatering peaches and listening to the Catalan discussions we lingered in those last moments of the evening together.

Here’s a short video of Maria del Mar Bonet singing at the event: