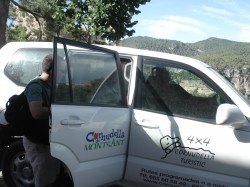 Hopping into a Toyota four by four run by Cornudella Turistic we bounced our way down the narrow dirt path leading up to the Siurana nature reserve. A quick stop to open the park gate – made possible by our driver’s connections to a park ranger that had provided him with a copy of the key – and we happily continued our descent down the mountainside toward the Siurana river.

After a hard day of blogging at Mas Perinet, La Conrería d’Scala Dei and a lunch review (full of pigeon – well most of us were)  at the Els Tallers Restaurant in the Hotel La Siuranella, we had anxiously awaited our side trip to the Siurana river. As one of the main attractions of the Siurana nature reserve, we had heard reports about the area’s beauty and were eager to see it for ourselves. 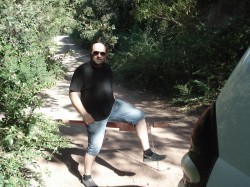 The first highlight turned out to be the drive down from the park entrance to the river level.  Speeding down the one lane road, over tree roots and a few feet from the mountain edge it quickly became clear why we needed the four by four. Whatever concerns we might have had about the drop off were put to ease by our non-chalant driver, who shot down the road with ease and confidence.

While the park is open to the public, the best way to head down is with a four by four taxi as it is at least a mile or so walk down the mountain by foot otherwise.  As an added bonus to taking the four by four our driver and local resident, Davîd, had a number of prize spots for us to visit. 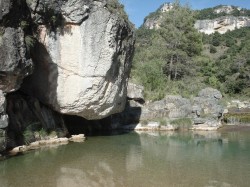 Once we came to a halt at the entrance to the river we jumped out of the four by four and followed David down a short incline to the river below. While not full of white water, the Siurana river has a number of little river pools and a few small waterfalls. Upon reaching our swimming hole we saw David had done us well as we had a small waterfall at the back of the pool and against the mountainside was a twenty foot boulder hanging precariously over the water’s edge – during high water times it might even be used as a diving platform.  After looking around, we quickly changed into swimming trunks and waded in. Much to our surprise we found the water warmer than expected and we were splashing around in no time.  After a few laps around the pool, we climbed up the slick, moss covered rocks to the small waterfall. Letting the water

spray over our heads and shoulders we enjoyed the last bit of the day before the drive back. Pity we didn’t do a wine review in the river – darn it! Oh well you can do it if you ever get to visit the Priorat on a hot summer day. We would recommend a chilled glass of two Cava Brut Nature next to the waterfall.

Here’s a video from the 4×4 heading down to the river – battery on the cam corder went so cut off abruptly before you can see the white water but you get the feel of the experience: