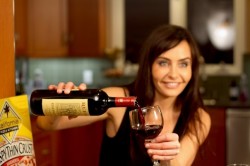 Celebrity Wine Review is an online wine review show centered around the premise that wine does not have to be pretentious or uninviting. Host, Kelli McCarty (Former miss USA and known actress), reviews wines in a variety of formats all centered at entertaining and engaging audiences and enhancing their exposure to the wine world. Some of the published and upcoming episodes include “at home” informal wine reviews, reviews on location at different vineyards, reviews at famous wine bars and at various wine tasting events and of course the big upcoming event is going to be 8 days with Wine Pleasures in several of Spain’s hallowed wine regions including Priorat, Penedès, Montsant, Conca de Barberà, Costers del Segre and Cava.

Kelli will also be participating in the After Conference Programme tasting wines from Bulgaria, Cava and Italy. Also in store is a Whisky tasting and a workshop on how to cut Iberian Ham. This will be Kelli’s first time trip to Spain and is, as you can see from her latest episode at Celebrity Wine TV very excited.

So who is Kelli McCarty?

“Kelli McCarty is a familiar face in both daytime and prime-time television. The former Miss USA-turned-soap star most recently appeared on NBC’s Passions as the sexy-psycho-Orangutan-employing-schemer, Beth Wallace. McCarty began the series in 1999 and appeared in more than 500 episodes. Some of McCarty’s additional television credits include Beyond the Break, Summerland, Beverly Hills, 90210, Melrose Place, Dream On, Diagnosis Murder, Silk Stockings, Pacific Blue, Travel-A-Round [as host], yourLA [as guest host] and Street Smarts [as guest co-host]. Dogs and Appetizers, Recoil, The Last Bachelor, Beach House, Polycarp and the documentary Rhinoskin are among her feature film credits.

McCarty has been interviewed by Larry King and has graced the covers of Woman’s World, Golf for Women, Bridal Star Hairstyles, Diet and Exercise and Soap Opera Weekly”.