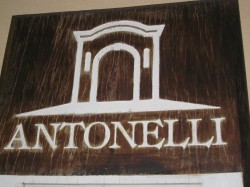 On our third day of Wine Pleasure’s Workshop Buyer Meets Italian Cellar we saw half of the group of wine importers leave while the other half stayed for the second part of the program: winery visits. The handful of us that were left were guests of the very kind Filippo Antonelli, President of the Umbrian division of Movimento del Turismo del Vino, at his home for dinner. Yes, his home. Sure, it’s a winery now but we truly felt like guests at his wonderful house. The villa was owned by the Bishop of Spoleto for 6 centuries but, when his great grandfather bought the place in 1881, it was a farm. After being shown the winemaking facilities, we were treated to a tour of his home. It was like walking through a museum! Old military gear, a library of epic proportions, stories of ceramic thieves breaking to get specific works of art and paintings that one wondered which famous artist had done. Then it we were treated to a wonderful meal cooked by women who seemed more like our Italian mammas than our personal chefs! 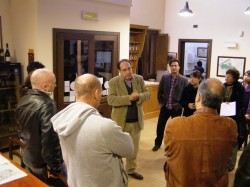 We were treated to a selection of antipasti fried cauliflower, bruschetta with Antonelli’s extra virgin olive oil, cured pork loin, leek frittata (omelet), roasted peppers and rosemary focaccia that was wonderfully accompanied with their Grechetto dei Colli Martani DOC 2011 and Trebbiano Spoletino IGT 2011. Their 2009 Montefalco Rosso DOC and 2009 Contrario IGT (100% Sagrantino) were served with an amazing Emmer wheat soup. This soup was a hit with most of us! It actually was nice not have pasta for a change! Then, as the meat (or “main”) dishes we were given wild boar made the local hunter’s style with turnip tops with roasted potatoes. These were accompanied by the Sagrantino di Montefalco DOCG 1999 and Chiusa di 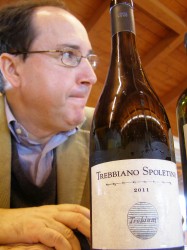 Pannone DOCG 2006. Maybe he was feeling generous, maybe it was the mood of the evening (maybe one led to the other?) but for whatever reason, we are grateful that Mr. Antonelli opened a DOUBLE magnum of the 1999 Sagrantino di Montefalco. One word to describe it: juuuicy! For dessert we were served baked pears made with Sagrantino and the 2007 Montefalco Sagrantino Passito with wonderful Sagrantino infused biscotti.

Throughout the week whenever we were treated to a meal by all the wonderful hosts, we were always served food that was the ideal dish to accompany their product. Most of us agreed that this meal was the most successful in pairing the two. In a world that focuses on stand-alone wine, this evening opened our eyes to understanding that wines of this region provide a heavenly experience when accompanied with food.  Mr. Antonelli – thank you! Antonelli San Marco, Montefalco, Umbria